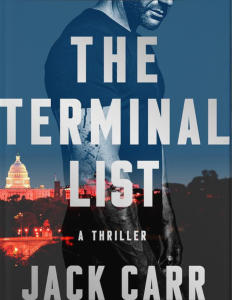 On his last deployment as a Navy Seal, Lieutenant Commander James Reece’s entire team was killed in a catastrophic ambush that also claimed the lives of the aircrew sent in to rescue them. But when those dearest to him are murdered on the day of his homecoming, Reece discovers that this was not an act of war by a foreign enemy but a conspiracy that runs to the highest levels of his own government. They have taken everything from him. Now it’s his turn.

With nothing left to lose, Reece applies lessons learned in more than a decade of constant warfare toward avenging the death of his family and teammates. In a thriller told with breathless pacing and relentless suspense, Reece ruthlessly targets his enemies in Washington’s upper echelons without regard for the laws of combat or the rules of law.

Driven by the love of his family and country and an undying need for revenge, James Reece is on a one-man mission to confront the corruption of absolute power and those who would do anything to achieve it.

(Source of Blurb: inside dust cover)

This book is riveting. I enjoyed it from beginning to end. I highly recommend this debut novel. It is masterful.

While I find the ex-Navy Seal superhero main character is a little overused in today’s thriller market, this one is very well done. Steve Berry writes a blurb on the back of the dust cover “Double the trouble, twice the action, and quadruple the enjoyment. Careful while reading this, it could leave a mark.” Consider me marked. This tale of revenge and righteous violence struck a chord with me. I found it emotionally engaging, powerfully written, and surprising in its depth. I am not a  weapons or tactics expert, but I would guess Jack Carr has his weapons and tactics presented with the highest possible level of accuracy. His detail is astounding, but not at all overwhelming to this non-technical reader. Carr has a great story to tell here. It is sufficiently anchored in reality to frighten the reader. The story has enough twists and turns to keep the reader guessing, and the suspense continues until the very last page.

My only criticism is a very tiny one. I found the bad guys a little bit too evil to be believable. Once you buy into the bad guys, however, there is a really clever, emotionally complex story.

I also posted this review on Amazon and Goodreads.