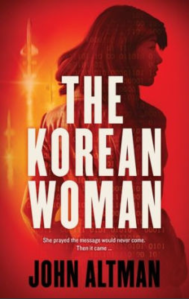 The “Korean Woman” is a very well-crafted 2019 thriller from John Altman. The plot revolves around the activation of a “sleeper” spy from North Korea. The “Korean Woman” is living a very contented life in New York City, having been married and is in the process of raising children. This is something of a domestic thriller, but not entirely. On the surface, this sounds like a very implausible plot, but Altman is very successful in developing this character and her motivation. If you are a reader looking for a strong female character, “The Korean woman” delivers. The strongest part of the story involves a chase by a group of Central Intelligence Agency spooks, using all sorts of high-tech equipment, but the spy manages to elude them using low-tech methods. I am reminded of an old movie, “Lonely are the Brave” in which a criminal is being pursued by the authorities with almost unlimited resources. In that movie, the viewer winds up rooting for the criminal. Altman takes this premise in a different direction, and does it very well. He has some pretty good twists up his sleeve along the way.

If you enjoy a good chase scenario with a small taste of domestic thriller, this book will provide that for you.

I received a complimentary copy of the book from NetGalley.

It’s been a while since I have written about writing. It’s been very slow.

I had a first draft of my novel written some time ago. I wasn’t very happy with it. My foray into the world of thriller reviewing gave me a lot of ways I could improve the novel. You learn a lot by reading the work of successful writers. My plot could be a lot less complex.  The stakes in the novel could be a lot higher. The characters could be a lot less flat and better developed. Too few of the characters were female. This is probably a vestige of old thrillers that I have read along the way. Any new thriller needs to have at least one strong female character or it won’t get too far in the publishing world, and will cut down on the potential market. My continual reading about the craft of writing also showed me in no uncertain terms that my writing could be a lot better. I delayed diving into the second draft. The demon of lack of self-confidence manifested itself. Now I believe I am ready.

In order to get things moving, I created what I call a plot matrix. It is a simple two-dimensional outline. The vertical part of the matrix is chronology, a time order when things happen in the novel. The horizontal element of the matrix is by character and character grouping. I can see at a “glance” what each character is doing or not doing at a specific point in time.   Right now it has over 40 rows.  Each row represents a particular point in time, and 15 columns, each with a character or character group. This way I can see the sequence of things, and determine who is doing what and when they are doing it. The more complex it gets, however the more difficult it is to see what is happening.

I learned some things by doing this.

Some of my chronology was not logical. Things were out of order, and it wasn’t clear how some situations came to be. Some of the events could be relegated to backstory.

I had too many characters. Some may have been unnecessary. I could collapse some of the characters.

I spent a lot of time and mental energy doing this matrix. I still don’t feel it is perfect. There are several inconsistencies remaining. I do feel I have a starting point for the writing of the second draft, however. I can see which of the old scenes can remain as is, which scenes need to be revised in order to enrich the characters or support the new, higher stakes plot, and which scenes can be trashed. There appears to be a path through the woods, but many weeds, thorn bushes, and predatory animals remain along the way.

Paralysis had me for a while. Insecurities abound, and I have found many excuses to do other things than move forward with the second draft. The matrix is providing a way, and giving me some hope about moving forward. I need to make sure the matrix doesn’t constrain me, and that if I get a great idea about the plot or the characters as I move forward, I can have some fun with it.

We’ll see how it goes.

Should I ever write a bad review?

This question has haunted me for some time now. I usually finish every book I start, but I had one book that just didn’t grab me. I won’t name it. I don’t believe it was a “bad” book, it just “wasn’t for me.” It was a thriller, by a very famous author who has been writing for a very long time and REALLY knows how to write. In fact, this book most likely achieved a level of market success that a writer like me could only dream about. The first three chapters were a prologue, and each chapter briefly and poignantly discussed a different aspect of the Nazi reign of terror prior to World War II. These were fantastic chapters, and made me anxious to read more. Once I got past the prologue, things went downhill for me. I found the book jumpy, and the characters were not well developed at all. I couldn’t finish it. The most likely reason for this was that the book was the third part of a trilogy, and I never read the first two. I didn’t know it was a trilogy until I was well into it. Probably the characters were very well developed in the earlier novels in the trilogy.

My question is should I ever write a review of a book that I didn’t like? Would it do anyone any good. On the “yes” side of the argument, words like “journalistic integrity”, “truth”, and “honesty” cross my mind. I believe it is the job of a reviewer to point out the good and the bad. Absent that, the review becomes simply a form of “free” promotion for the author.

On the other hand, I have absolutely no desire to hurt anyone. I have no delusions that my review would do any harm whatsoever to the well-established author referred to above who was guilty of nothing more than penning a novel that this insignificant reviewer did not like.  Words do hurt, however, and the last thing I would ever want to do is harm an author that was publishing a novel for the first time and is very sensitive to any feedback, good or bad. My own insecurities as a reviewer come into play here as well. My personal review may not be “accurate” or “well-informed.” I may not have even read the novel with as much attention as it deserved. I have learned that writers need to have a very thick skin, but I do not want to be the one to test anyone’s skin thickness. Not yet, anyway. If I REALLY don’t like a book, I will probably not write about it here.

In the meantime, I will probably not publish a lot of completely negative reviews. I will try to focus on where the book could be improved or itemize parts of the book that didn’t work for me.