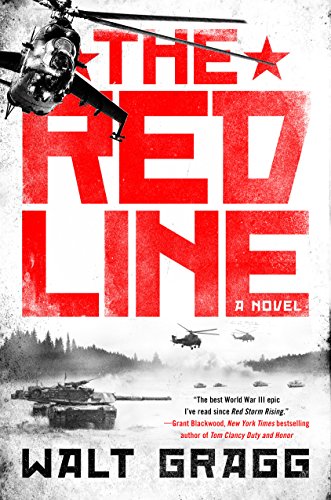 “The Red Line”, published in 2017 by Walt Gragg, is a World War III scenario.  He did a fine job with it. “The Red Line” grabbed me right from the beginning. His political scenario was very plausible and his descriptions of the folks in the trenches were realistic and riveting. He pulled absolutely no punches and conveyed the horrors of modern warfare to the reader without any sugar coating. His story included combatants and their loved ones.  There is bravery and heartache on and off the actual battlefield. He walked the fine line showing the great heroism by those fighting the war without glorifying warfare. The technical details seemed to be accurate but not overwhelming to this non-technical reader.

As a navy veteran, I was hoping to see more Navy characters. Gragg’s only Navy character was relegated to answering the phones. An aircraft carrier was destroyed in one sentence. This comment is more good natured inter-service ribbing than a serious criticism. Gragg’s story of what World War III might be like for the participants was riveting. I recommend this book highly.

“The Red Line” was one of five nominees for the “Best First Novel” at the 2018 Thrillerfest. Apparently many others liked the “Red Line” as much as I did.

I bought this novel at the 2017 Thrillerfest after meeting the author.